This week, as the nights drew in, my usually long florist’s fuse got shorter with each day. By Friday I was racing around like a Catherine Wheel, sparks were flying and I was ready to explode in a burst of floral fireworks, anyone in the way was likely to get showered in prickly Eryngiums!

The week started in what I’d call a state of organised chaos. Flowers came flooding in from all directions, the Flying Dutchman arrived as usual, followed closely by The Italian Stallion, ‘Maximillion  il Florista’ and good old ‘Dan the Man‘ our very own Southampton based Floral Fairy – referred to as such because of the way exactly the right flowers simply appear from nowhere in the early hours of the morning NOT because of his penchant for wearing tutus at the weekend!

We had a Friday wedding to prepare for, we had a couple of big corporate events in the diary and I was determined to get Christmas out by the end of the week!!

I’ve been living in Santa’s Grotto for weeks now. I’ve had five life-size willow Reindeer standing in the bath, golden balls under the bed (and I don’t mean David Beckham), painted wooden toys stacked to the roof in what was our new extension and I was DESPERATE to get it all out,

We recently had a guest who had to share a bed with three flashing elves (the twinkly version not the rude trouser flashing type you would expect to get in a less sophisticated store) !!!!!

John was busy assembling various items of display furniture, including a new ribbon dispenser (I will tell you all more about my ribbon obsession another time, but in the way some women like shoes, some like cats, I like ribbon!) when my brother Phil wandered in.

Phil lives just down the road with his wife Michelle. You might have seen my sister-in-law,  dressed in horsey gear, loitering suspiciously with a wicker basket over her arm. Michelle is the publisher of Forelock Books based here in Pulborough, but she also does our social media and regularly pops up from behind a bucket of blooms with a camera, ready to catch us in action. She’s the Alice to my Vicar of Dibley and gets us all giggling.

Here’s a snap she got of John getting into character as the Shop Elf.

Like me, my brother Phil loves village life. He looks like me, with a redder complexion, less hair and a flatter chest. His contribution to village life is propping up the bar at the Oddfellows, boring people with golf stories, chatting to Saagar from the village stores and walking his dog Maisie, on the brooks.

Ruth the ‘Plant Whisperer‘ came in to help us out on Friday. Ruth knows EVERYTHING there is to know about plants, Pulborough’s Alan Titchmarsh and… The NATIONAL judge for ‘Britain’s in Bloom‘. As you know I love flowers, but Ruth loves plants like they are her own children. I often catch her talking to them and I’m sure she’d report me to social services if she ever caught me decapitating a slightly droopy bloom. 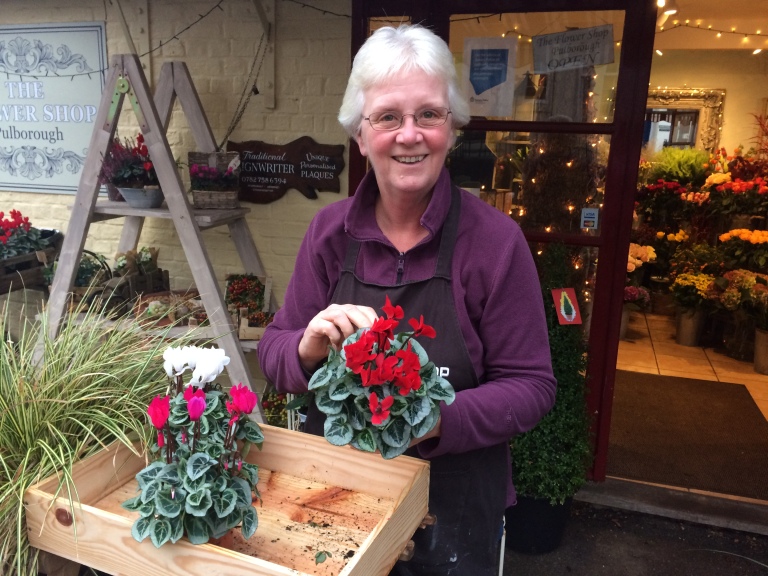 Thank heavens Ruth was in together with Annemarie, John, Rachel and Rebecca when things reached a climax on Friday afternoon.

The shop floor was strewn with broken up cardboard boxes, shelves were half filled with Christmas paraphernalia, Ruth and Becky were bickering about the positioning of the painted wooden soldiers, John was filling the van with enormous floral displays, strapping them in so they wouldn’t fall over in transit, I was putting the finishing touches to the bridal flowers for a wedding which was happening in just 2 hours time and didn’t have enough fat little fingers to tie the bow and hold the stems, so had a little hissy fit.

“Will you two stop squabbling over soldiers and give me a hand” I squeaked, trying hard to sound authoritative, as the air started to turn blue with bad language. It seems the crosser I get the higher my pitch gets, so beware if you hear me squeaking like a mouse, there’s a lion waiting to get out.

Annmarie was manning the door, trying to intercept customers before they fell into a scene from ‘Alice and Wonderland.’

The fireworks in The Flower Shop earlier in the afternoon must have been visible or audible to our neighbours, because just as we were about to raze the shop and all it’s Christmas delights to the ground, in walked Colin the Cork-popping Crusader with an open bottle and a few glasses.

Just what the doctor ordered!