I can’t do everything, but I’ll have a damn good go at it! Not only do I want to do everything myself, but I frequently insist on doing things I know absolutely nothing about.

I could be standing in the shop with water spraying uncontrollably from the tap, soaking everyone and everything. There’ll be a plumber standing next to me and I’ll be screaming at him to get out of the way and pass me a towel. 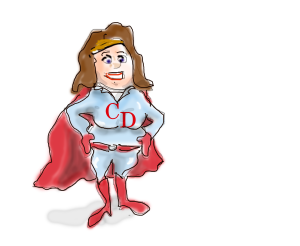 There’s a phrase that suddenly comes to mind, something about buying a dog and wagging your own tail…no that can’t be right…buying a dog and barking at the postman…mmm that doesn’t sound right either. Anyway it’s something to do with employing an expert and attempting to do what you’ve employed that person to do, yourself.

That’s me all over.

There is ONE thing I have left to someone else and that’s the shop’s website. I wouldn’t mind having a go myself and it’d probably be fabulous, BUT I can’t be fabulous at everything, it just wouldn’t be fair on everyone else and I’m nice like that. Besides my webby-lady is my sister-in-law and to be honest, she’s a flaming genius!

Mind you, she sometimes surprises me.

Not long after she set up our ‘Meet the Team‘ page I would get orders for local deliveries where the caller would specifically ask if John would be delivering them. Initially I didn’t think anything of it, but when one lady called to say how handsome John looked in his web profile and how lucky I was to be married to him I got suspicious. Eventually, I logged on to the site and had a look for myself.

John it seems is masquerading as George Clooney!

The other thing my lovely sister-in-law has done, is set up an ‘Inspiration’ page to help customers choose something special for a friend or loved one. It was initially to help sons on Mother’s day, but it’s been left there for anyone and has had lots of great feedback . What would have been useful to all my lovely florists and John would have been some awareness training, so that if someone called asking for a “Blooming Marvellous” bouquet, from the website, they might have some blooming idea of what the caller was referring to.

Going back to John aka George C Movie star, turned Saturday delivery driver. I left him alone in the shop the other morning. It was before 9am and I had to rush off and deliver some flowers for a funeral which needed my special attention. John was just setting up and I was pretty sure he wouldn’t get a customer asking for a special bouquet to be made up, while I was away, given that he’s an IT expert not an actual florist. As it turned out a gentleman came in asking for a “Blooming Marvellous” bouquet like the one on the website!!!

Not only is he NOT a florist, but he had no idea what the chap was talking about or how much one cost. Despite this he struggled on, trying to delay the gentleman until either I returned or Lisa (the florist) arrived. I think he had managed to convince the customer that he sort of new what he was doing (I put that down to his superb acting skills and all those Oscars we have in the bathroom) before Lisa stepped through the door.