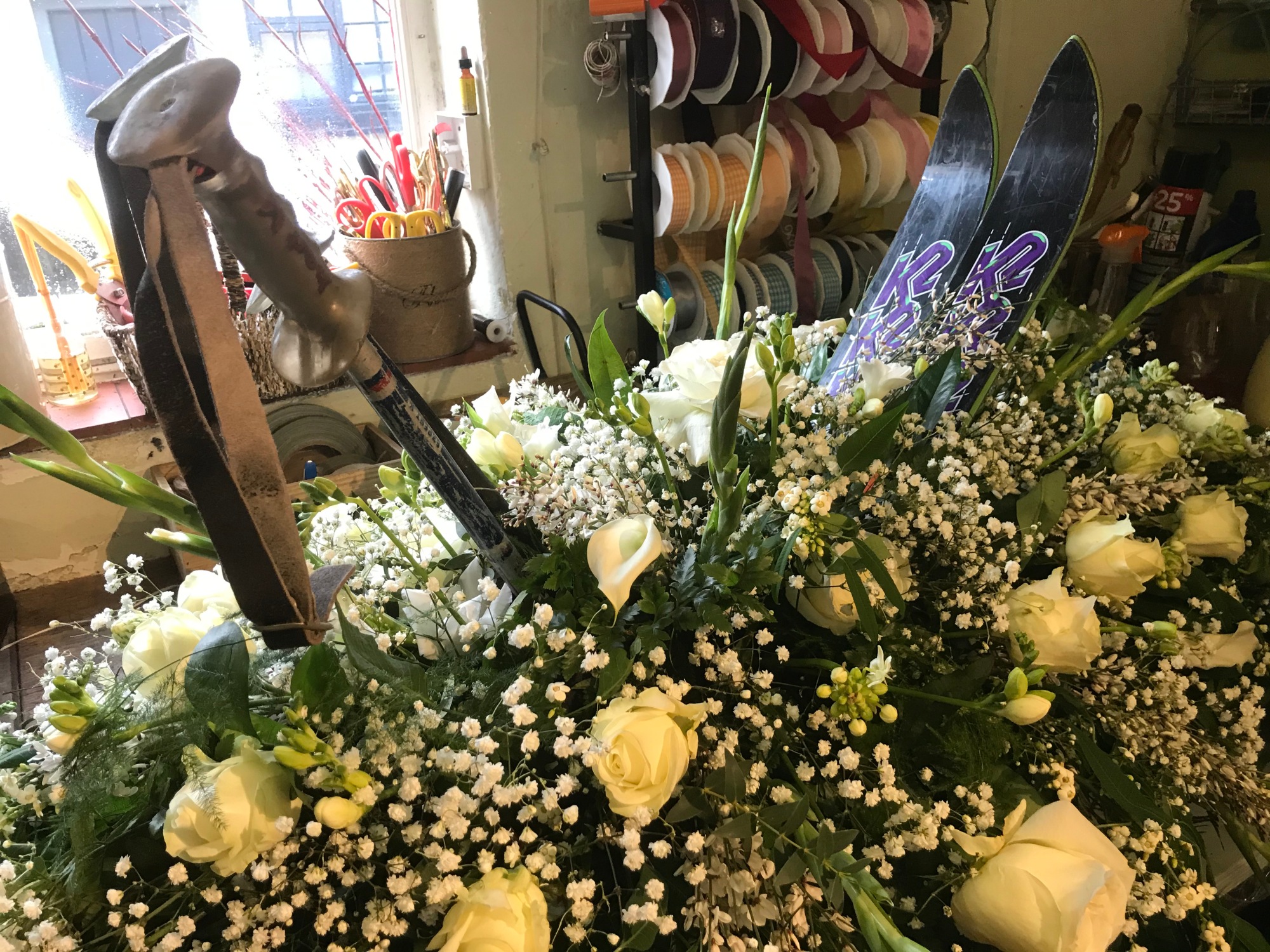 I don’t often say “We had fun doing a funeral”, but this week we did.

Sometimes I’m asked to do something different, challenging and yes, slightly humorous. It’s these funeral tributes that really say something about a person, who they were and how they will be remembered by friends and family.

I want my funeral to say something about me, after all it’s always ‘ABOUT ME’. If it’s MY funeral I want to be the centre of attention. I want people to talk about me, about how I made them laugh and what a great florist I was. Flowers would play a big part I’m sure, but there are other things that say who I am. GIN for example.

I also love a project, whether it’s knocking down walls, planning an extension, re-organising space or re-landscaping the garden for the umpteenth time, I have to have something on-the-go. I’m not sure how this would translate into a funeral tribute but it’s going to give someone something to think about.

This week we had been asked to make a funeral tribute for someone who lived with a passion for skiing.

The gentleman’s relatives even brought in his skis and ski poles so that we could incorporate them into the design.

The first ‘challenge’ was the size of the skis and poles.

They weren’t going to fit, upright on top of the coffin if they were full-size, so we had to cut them down.

Have you ever tried cutting down a pair of skis???!!

They are made to bend, without breaking and have steel edges to cut through the snow.

John had to root through his extensive toolbox, that basically consists of a hammer, a spanner and a hack-saw.

The hack-saw it was, but it still took John a couple of days to cut the skis, sawing through metal, fibre glass and a centre of wood. It’s a good job I don’t pay him. The second challenge was getting the skis to stand up. We couldn’t just plant them in the oasis like snow, we had to wedge them some how so they didn’t fall out at an inopportune moment.

Now, we all know that I’m the brains of the operation but to be fair this was a team effort. Becks did all the hard work greening it up and sketching through the bulk of the flowers, I just placed the final blooms, stealing all the glory, as I normally do!

We thought we’d finished and stood back to admire our efforts, patting each other on the back. Then carefully taking an end each Becky and I attempted to move it before realising that the frame wasn’t strong enough to carry the weight of the flower and adornments. The tray started to sag and we placed it back down rather quickly. Thinking on our feet, we decided that we had to double up on the frame which meant dismantling and re-arranging almost everything, but it worked and if I say so myself the result was a triumph, worthy of a medal.